My first Blue Ridge Parkway sunrise with my hubby. If you’d like to watch it without having to get up at 4am.. click the link to the video. https://youtu.be/OrQbZXyLdKc

I had planned to go with a friend from the camera club but sadly she got sick. Hubby didn’t want me to go alone so we saw our first sunrise together on the Blue Ridge Parkway – me outside the car with my camera in the wind and him inside the car.

This is only the second sunrise I’ve seen from the Parkway but it won’t be my last ~ #LoveLivinginWNC. I only had one camera with me so I shot video, stopped and shot pics so that is why it’s not just one long sunrise video. I didn’t add extra video stabilization when editing the video to remind me that even if the wind doesn’t feel that terrible I should have weighted my tripod down because you can see the jiggle when the wind blows. I had every intention of editing my photos and video but time kept passing so the video is straight out of the camera.

We don’t work on Sundays and either are couch potatoes and graze on junk food most of the day after church or we go hiking – one extreme or the other I know.

This past Sunday we planned an easy hike because my back/rib is still not right. The weather forecast looks like the switch is being flipped from spring to winter mid-week so we wanted to at least get out while we could without being cold and wet. Then over coffee, my reminder popped up about seeing the moonbow in Kentucky.

Earlier in the year on our way back from our Kentucky trip, we stopped at beautiful Cumberland Falls mid day and right near a new moon. I came home and put a note on my computer of when I wanted to go back. However, I didn’t set the timer up correctly to remind me with much of an advance reminder so hubby again stepped up and agreed to go. I didn’t even try to call and find someone so last minute as I pictured how that conversation would go…

Hi, I am leaving around noon to drive 3.5 hours to Kentucky to hike to a falls I just read about this morning then stand in the cold on concrete and rock, with lots of other people trying to see a white moonbow that if everything comes together (clear skies, mist, moon), will look like a color rainbow in camera, then drive 3.5 hours home… want to go?

The hike to Eagle Falls sounded a little much for my back/rib since my right arm is still an issue so I didn’t pack up the new backpack or even carry the tripod on the 2.5 mile hike. It said we may cross water and it may be unpassable but it’s been pretty dry. I think it used the word rugged for the last part but boy was it worth it. Such a pretty falls but only shot handheld and quick because it was starting to get dark. 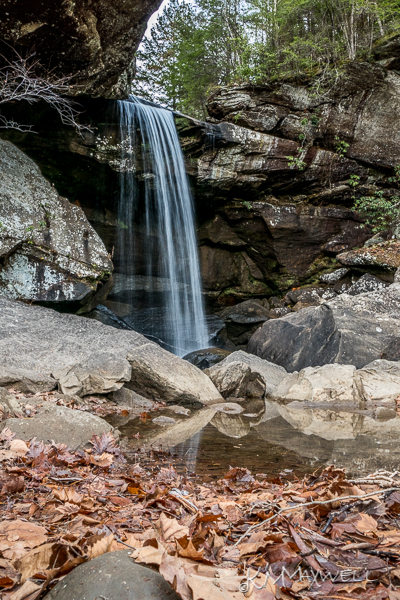 So back at the one platform at Cumberland Falls. Another photographer said in April they moved the guardrail back so you can no longer shoot as low into the basin. Okay, such is life. Their website said the viewing time was 6:30 to 8:30 but the super moon didn’t even clear the trees until 8 pm. Then more people came who clearly didn’t come stand in the cold early based on the website data. So much for standing on the hard rock for 2 hours staking out my spot because my tripod legs got kicked repeatedly. Think I’m going to buy some glow in the dark tape to put on them. I haven’t been able to find my camera’s rain cover and took a washcloth to cover it from the mist. I should’ve bought something larger or fitted so I didn’t have to keep one hand out in the cold on it to make it stay for 2 hours.

Surely kids and people didn’t mean to mess up my long exposures right?

I tried several different settings but my best shots came not surprisingly from the recommended settings from Cumberland parks website. I had every intention of trying my polarizer but after waiting so long for the moon to clear the tree line, and with the number of people I didn’t. I’ve played with my polarizer from rainbows from the sun and rain and know you can rotate a circular polarizer to make one turn vivid to completely disappearing. I read you could only see the moonbow from the overlook but I know some of these were clearly taken from below. The stars were getting dimmer and dimmer from haze or clouds so after I took a few shots we called it quits.

This was kind of like when shooting the milky way as our eyes did not see all the camera saw. I’m not in love with my shots but I am glad we didn’t pass up the opportunity to see and shoot it. There were only 2 or 3 other tripod using photographers there. I wonder what they captured?

I didn’t even notice until this morning that the rainbow I shot was facing a different direction than the one on their website. Also, just a note if you go- when we got back to the parking lot there was an old guy stopped beside our car who moved along when we came up. He appeared to be scouting out unlocked cars and someone else’s car alarm went off before we left the lot. So, if you go make sure you lock the car because it may have its content removed while you’re busy staring at a moonbow.

One moon shot from last night in Kentucky and then this morning back in NC from inside my warm home, I shot a quick handheld of the last of December’s super moon.

4 thoughts on “The sun, moon, waterfall and a moonbow”