If we start in the higher elevations and move to lower elevations, then over the state line to South Carolina, we typically can visually soak up more than the average leaf peeper. 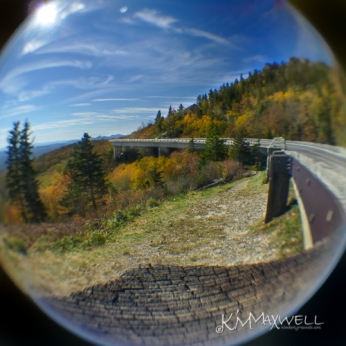 But this year, this year we had a long extended hot summer, followed by a few hurricanes, rain and high winds ripping the green leaves off the trees before they had time to turn colors.

Marjorie and I took off a morning, early the 4th week of October. We each had a spot to show the other one.  The BRP keeps their website up to date with road and trail closures. It said Tanahwa trail south of where we were headed was closed and the bridge was out due to storm damage. That’s what it said earlier when we decided to go to SC too.  I’ve learned the hard way to check that right before hitting the road. Six miles short of the viaduct Marjorie saw a road closed sign. We remained hopeful and kept driving, just knowing all the cars we passed were talking about the idiots who couldn’t read. Thankfully, continuing on this time paid off as the road was not closed – just like the website had said. The viaduct is at 4100 feet elevation.

We passed ice hanging from the rocks all along the parkway, and so many trees just completely bare covered in lifeless brown foliage. We pulled off for a quick look at Glassmine Falls. I don’t know what is wrong with the color in my photo and for the life of me, I just can’t make it look like what I saw. It wasn’t drab but it WAS a long way away and still in the shade.

Marjorie showed me “the spot” to capture the Linn Cove Viaduct from above where I always wanted to capture it from.

And, after one failed attempt, I showed her the beautiful (I think) Tanahwa bridge. It’s over Boone Fork Creek and I think there is another bridge called the Boone Fork bridge. Such a shame some moron decided to graffiti up the back side 😦 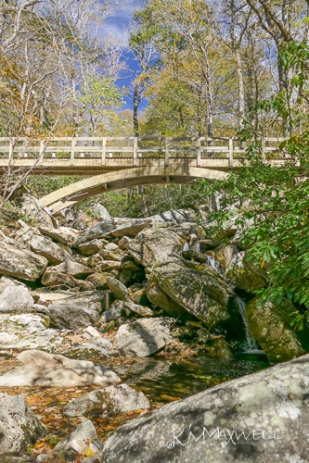 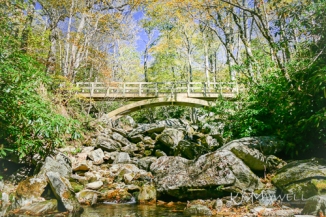 I read in Kevin Adams book about Tanawha falls but I don’t think he would consider the water under the bridge much of a waterfall either. Maybe if you continue the long Tanawha trail there is a real waterfall?

Look- I remembered to carry AND use my lens ball plus I even took 2 self-portraits – well, as much as I’m going to (boots and shadow me).

If it’d just looked back at my blog, I would’ve been able to read the correct overlooks to pull off at. Then again if I’d done that we wouldn’t have walked from one end of the viaduct to the other seeing these neat places. I’m not sure how I never knew we had a visitor center right there.

While we were out that way (in a very loose term) we stopped at the Brown Mountain Overlook. I shot this mountain across the road. I wonder what the name of it is? If you know please tell me. 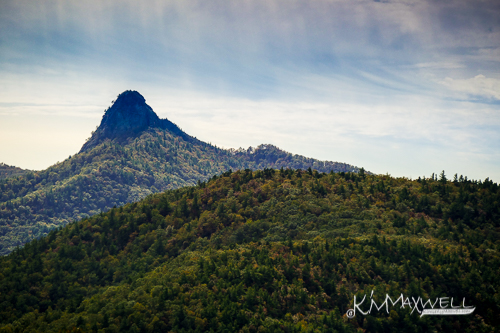 Since I’m filling my blog up with photos, and G+ is shutting down, I bet you noticed I started giving links to see more of my photos over on Flickr. Well, Flickr was bought out by Smug Mug and they now have a 1000 photo limit on their free accounts. I’m over that now and not really wanting to cough up money to store and share photos. I think with all my recent problems with Dell, all the extra time it will take to stuff back right, with the upcoming year-end headaches of two self-employed people, Thanksviging and Christmas – I’ll just stick my head in the sand for a bit and keep uploading here. I look into more options next year.

I hope to get caught up on my autumn post from recent outings, but I just keep going out on photo shoots instead of sitting inside, culling, editing, and sharing post.