High Shoals Falls took about 90 minutes to get to. Kevin Adams book had us taking exit 105 and my GPS said 104. Not sure if one is better than the other. On the road to get there it didn’t really like we’d be finding a visitor center and a state park. Adams said as we crossed the bridge at Jacob Fork to look upstream to see a nice cascade. I was reminded he drives a truck that sits higher. In my car, we saw a concrete wall.

My sister-in-law had been to an event at South Mountain State Park last year, where she held a hawk on her arm, but they didn’t see the waterfall because it was labeled as strenuous. As we hiked, I thought, this must be one Kevin marked as strenuous because of the stairs.  I prefer that to bushwhacking or rock hopping,  I think the High Shoals Falls Loop trail was a 2 1/2 mile hike, but for 3/4 of it, it felt like we were going uphill. No really- up hill both ways until the last leg, considerably past High Shoals Falls in the loop.  If I hadn’t already used my blood moon for 4of52, I would’ve used this shot. Just like the week before I had several shots taken this week to choose just one from.

Let me back up to the start. We stopped at the visitor center to use the (real) bathrooms.  I’m so thankful when places have those, especially on early hikes after a pot of coffee- even if I did accidentally leave my 3rd and final 16oz mug on the counter at home.

When we got to the parking area it was 26 degrees and only I think one other car in the whole parking lot. I love having waterfalls to ourselves but hubby mentioned as we get older, that may not be such a good thing. I need to remember to tell someone that will notice if I don’t text back at night, exactly where we plan to go.  I really don’t know how to dress for cold weather hikes! I need to find a thin but warm and waterproof winter coat and invest in some thin warm long johns that fit. My ancient Cuddle Duds do not. Hubby works in the cold, so he gets it. I didn’t really start hiking until after 2008 and only recently started going out on the trails in less than nice conditions. It’s amazing how much colder, wetter, and exhausted I’ll get for a photo.

I MUST find an eye doctor who can get transitions made for me, with adding the glasses strap since they won’t stay on my head when I have to take them up to see the camera, plus the earmuffs or hat was all just one big hassle. I tried out the scarf for hike hack trick and it may have worked if I didn’t wear glasses. They kept fogging up when I tried to breathe with the scarf over my mouth to warm the air. A test back at home really makes me think my glasses were just made wrong, as I can see better close up thru hubby’s stronger prescription than I can or ever could with the ones made for me.

There is nice signage and blazes and only a few places we were specifically looking for a blaze to know we were on the right trail. There were some rock steps, and then some rocks from a slide and even some huge slabs that I forgot to get a photo of. It made me think of how many rock formations we ourselves have stood on that are not necessarily always going to be there. It also made me a little leary after all our rain when the steps after the falls continued up the stairs later, beside big rock slaps with large crevices in them.

The trail runs alongside the river for quite a bit on the way up and the sun was in our eyes making me regret not getting a cap. There was a sign about watching for rattlesnakes but in this weather, we didn’t think we’d see snakes or bears.

We passed a photo op, with what hubby called the bearded rock. Looking at my photos it kinda resembles a bearded walrus complete with face and flipper too, but then again I see shapes all over the place.

We passed lots of trees that had burned and wondered when the fire was. We saw lots of trees and rock down and plenty of sawdust where they recently cleared the trails from fallen trees. Entire areas on the mountainside looked like a jumbled mess after high winds or slides scattered the forest. They had information signs along the 2.7 mile loop that if I recall correctly said one of the major rock slides happened after 1989 with Hugo and all the rain. 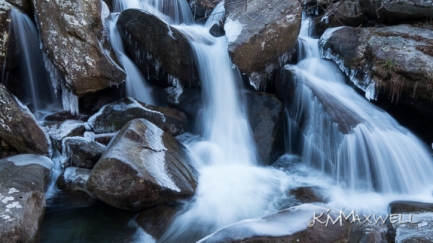 Before you reach High Shoals falls there is a pretty cascade waterfall that you walk right beside on the boarded walkway. 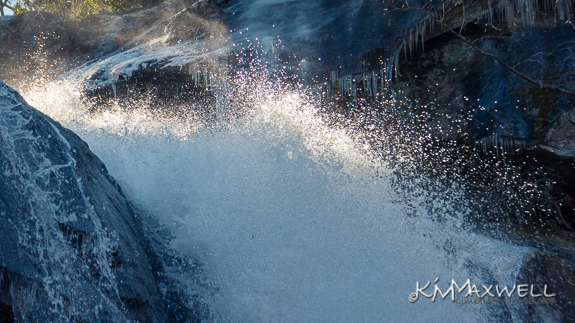 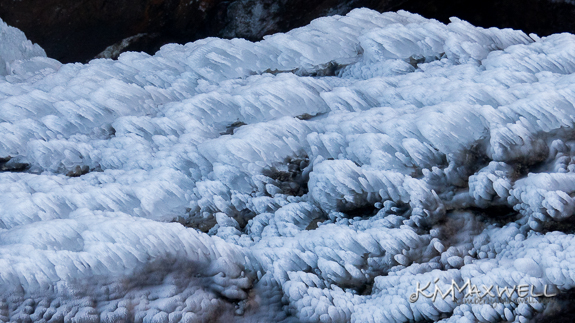 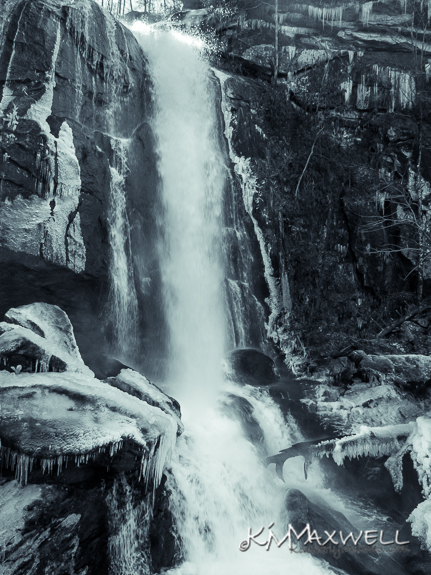 At the falls itself, I was just amazed at how beautiful it was. I was also pleasantly surprised to see that it was not in complete sunlight when we reached it at probably high noon.

We saw and felt something we’ve never experienced before. Even though the entire wood structure was covered in ice. Somehow we could still walk on it. It was nubby ice I guess from the spray and it was so textured it wasn’t slick as glass. Think of a truck bed liner.  Now don’t get me wrong. I still took baby steps and didn’t carry my camera on the tripod while I was walking. This was one beautiful sight! 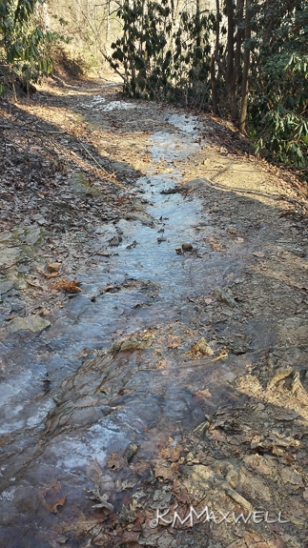 Above the falls, sometimes called Upper Falls, they had another sign that said the bathtub size pothole only has water in it after high rains. It has water rushing in and out of it and was completely submerged.

The trail, mostly after the falls had several completely slick spots. Towards the end, we saw a couple with a dog starting the trail. It had no protection for its feet even though it looked like it had a pack of some sort carrying stuff.

My backpack is still not ideal for how I use it or on my shoulders. It is nice when you want to just get to the camera part but if you want the camera AND your tripod it all has to come off and it won’t sit upright. That coupled with my shoulder pain, annoying glasses and trying to do stuff in the cold made me wonder why in the world I want to shoot nature. I thought of my friend Paula, who does portraits and weddings. The conditions are often better and the pay always is. 🙂

I had wanted to do Pot Branch Falls too, as it is on my bucket list. But with all the rain I assumed the two creek crossings would be high and cold and the rock down to the falls would likely be ice covered, plus we were running of time. Hubby had to be back and I was meeting some friends before the camera club meeting. 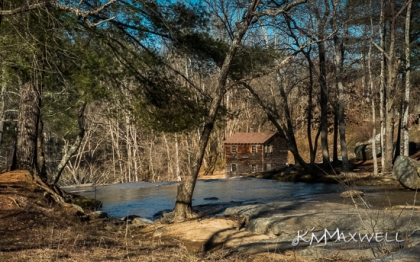 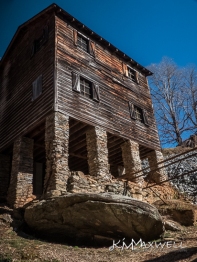 So we added the “few dozen yards” of a walk to see McGalliard Falls at exit 111 in a park. Just behind the picnic shelter, there was a concrete area to stand and see the falls, but of course, I wanted to walk to the other side. In Adams book, he mentions a big tree that took out the mill wheel and lots of yellow tape and signs. The wheel was not turning but I didn’t see tape or signs. We did, however, see another huge pin that fell across the stream just below the falls. The sun, at probably 2:00 was horrible here. I was shooting right into it, but I didn’t have the heart to ask hubby if we could go back to the platform we started at, to get just a few more.

My calves and lungs got quite the workout.

All the way back home, I unpacked my lensball that again, made the entire hike without being remembered. I had one pouty Tyler waiting for me. He hates it when we are gone all day. To make matters worse I turned around and went to the camera club, but at least he had hubby then. I try not to come in the door and go right to bed, even though I prefer to be asleep at 9pm. I ended up with a bad, but non-migraine, splitting headache. Haven’t had just a normal headache in ages, as I’m usually okay or it’s a migraine, so my poor boy was mad at me for coming in and going right to bed. He is such a needy cat, and really doesn’t like us to be gone.

Think hubby wishes he only had to deal with bras hanging up to dry?

I am thrilled to report as I typed this post this morning my first full Carbonite back up finally finished. It only took 28 days running 24/7 and calling to buy more bandwidth from Morrisbb.

If you enjoyed this post, my cover design or photography -please share.
If you’d like to follow my blog, just click on the “follow” button in the bottom righthand corner of the page or on the home page.  You enter your email address, and you’ll receive an email confirmation in return. I do NOT share email addresses.
To learn more about my book cover design, photography or the books I’ve authored
— my first homepage on this site has all the links.